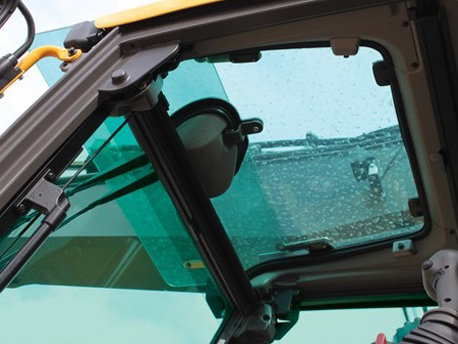 The majority of new machines have air conditioning, but air conditioning uses up a lot of diesel, and even on maximum cool setting that part of the driver’s body exposed to the sun’s rays can become really hot. With Hammerglass IR the climate within the cab is distinctly more agreeable, and the related diesel costs can be reduced substantially. Around half of all supplied Hammerglass vehicle screens are of the IR type. The IR glass offers the same performance as ordinary Hammerglass in terms of strength, chemical resistance and scratch resistance. 12 mm Hammerglass IR is RABS classified.

Solar heat reduced by half

Hammerglass IR (Infrared) removes 45-55% of the incoming solar radiation. The screens are supplied in green-tinted or grey-tinted Hammerglass IR. The weak tinting should not however lead to their being confused with ordinary tinted vehicle windows. When the IR screens are manufactured, a substance is added which absorbs the sun’s infrared rays (heat radiation) without any appreciable reduction in the light transmission (approximately 10%). The effect is clearly perceived if one tests the transmitted radiant heat with an IR lamp. Whereas a normal screen provides full radiant heat transmission, the attenuation offered by IR screens is extraordinarily effective.

Pentti Lappalainen runs a large peat farm outside Vasa in Finland. In the summer of 2012 he conducted an experiment: on one of two identical Åkerman E series diggers he fitted Hammerglass IR glass in all of the cab screens. The two machines were used to perform identical tasks on the farm, and were operating for around the same number of hours. The digger fitted with the IR glass had a fuel consumption that was € 1,100 (10,000 SEK) lower than the digger with ordinary glass! A highly unscientific study perhaps, but it nevertheless points to massive opportunities for savings that can be made in relation to the cab cooling system.