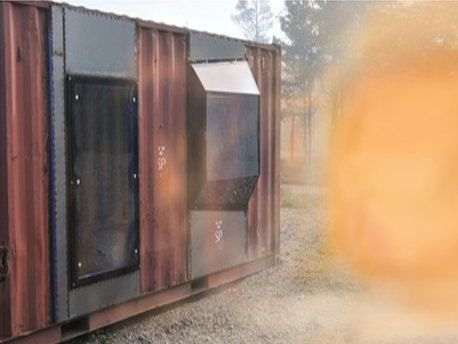 Undetonated explosives (duds), large rocks and boulders may pose a direct threat to the life of the machine driver. The Swedish Work Environment Authority has for this reason tightened its regulations relating to mining and quarrying: where there is a risk of undetonated explosives being encountered, or where quarrying is in progress, special glass must be used in the machine cab. If a charge is properly detonated, it is not sufficient to have protection in the windscreen alone. In a powerful explosion the side screens are also forced into the cab, regardless of whether they are made of toughened glass or laminated glass. Hammerglass solutions are also available for side screens and rear screens.

A series of tests in accordance with EN 13124-2 has been conducted on Hammerglass vehicle screens. Screens in a number of designs were mounted in various types of steel frame. Seven explosions were carried out, at a distance of 3 metres and 5 metres respectively. As a result it was demonstrated that 12 mm Hammerglass screens withstand the pressure wave generated by 3 kg TNT being exploded at a distance of 3 metres. As an added bonus, at the end of the test SP arranged several kilograms of excavated rock in front of the explosive charge. The rocks made deep notches in the screens, but nothing more. On the other hand, the rocks went straight through the steel plate in the container – 3 mm Corten steel – and the container was physically moved by the explosions, despite being filled with 20 tons of concrete pigs  in order to stabilise it.

The Hammerglass RABS-frame has been developed with a focus on maximising personal safety in tough environments. Large rocks, trees, logs, sharp stones and explosions – the machine driver must feel safe when facing any of these hazards. Our specially developed system comprising a 12 mm Hammerglass screen bolted to a sturdy steel frame has undergone rigorous testing at SP Technical Research Institute of Sweden and SMP Swedish Machinery Testing Institute, and meets the requirements laid down in the RABS-classification. In order to combat wear and tear from the windscreen wiper in extremely dusty and gravelly situations, as experienced in mines and quarries for example, the screen is provided with a self-adhesive sacrificial film. The driver himself replaces the sacrificial film as and when required.